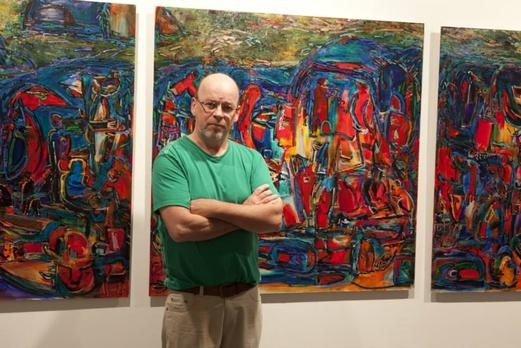 Patrick Doyle is a painter based in Thunder Bay, Ontario. Having graduated from the Ontario College of Art and Design’s Graduate Program, he relocated back to his hometown in North Western Ontario. The unique, rugged landscape has been a continuous inspiration for Patrick, which is reflected in his original works.

Read More
On Patrick Doyle’s Painting- by Richard Asham-2013
Synesthesia-The Sound of Colour
Simultaneously paleolithic yet modern in bold subtlety, Patrick Doyle’s paintings seem as though they’d be equally at home glimpsed by torch-light in a subterranean cave or fluorescently illuminated inside a 64-story skyscraper.
As claustrophobically rich as a pre-drip Pollock, as unrepentantly colour-infused as a Matisse, with the complex multiplicity of synthetic cubism, Doyle’s work defies easy classification.
Patrick is a non-linear archaeologist with stories to relate through paint. Sometimes figurative, sometimes landscape (but never individually-usually together), the narrative of each painting unfolds according to the level of penetration of the viewer’s insight. The overall impression is that the artist is choosing to uncover layers of meaning while never giving just one definitive perspective. The artist/archaeologist leaves at least much unrevealed as exposed.