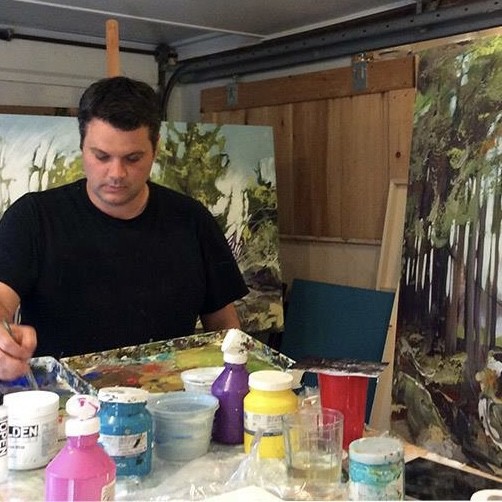 Shane Norrie is a well-established clay artist, and also a widely exhibited painter. His paintings frequently echo the signature organic, textural aesthetic of his ceramics. Ever evolving and experimenting, often his subject matter references local surroundings and familiar landscapes, while moving in of the realm of abstraction.

His work can be found in numerous national and international publications such as ‘Canadian House & Home’, Canada’s ‘Style at Home’ and ‘Marie Claire Maison Italia’ magazines. Also, on various television programs including HGTV’s ‘Income Property’, ‘Disaster DIY’ and ‘Pure Design’, ‘City Line’ and ‘Marilyn Denis Show’ and on the set of ‘Canada AM’.

Norrie has exhibited extensively with both his ceramics and paintings and received much recognition from peers and patrons. His ceramics can be found in the permanent collection of the Sanbao Ceramic Institute in Jingdezhen, China. His paintings can be found in many private and corporate collections, including the Canadian consulate in Nagoya, Japan.

Shane Norrie was born in 1978 in London, Ontario and currently resides in Ingersoll.

He graduated in 2000 from Conestoga College in Kitchener, with a certificate in Graphic Design and Advertising. Before and during his studies at Conestoga, he dabbled in ceramics as a hobby.

Upon graduation, Shane worked in the field of advertising in Toronto for one year, before deciding to pursue ceramics full-time in 2001.  After leaving his advertising career behind, he was employed part-time as a kiln technician at the Burlington Art Centre. This allowed him access to a variety of kilns, and a place where he could experiment with various facets of pottery making and firing techniques.

He has participated in a number of exhibitions, from humble beginnings at the local Creative Arts Centre in Ingersoll, to participating in the 8-month travelling International Chawan exhibition in 2005, alongside four other Canadian Ceramic Artists.  The Japanese Embassy in Belgium sponsored this exhibition.  Also in 2005, Shane participated in ‘Beyond Boundaries’, with 3 other Canadian ceramic artists in ‘Gallerie In der Allert’ in Keispelt, Luxembourg. This exhibition included artists from Canada, United States, Sweden, Australia, and Hong Kong.  Most recently, he was invited to participate in an invitational ceramics exhibition, in October 2009 at Sanbao Ceramics Institute in Jingdezhen, China.

Shane was an active member at the Ingersoll Creative Arts Centre, teaching workshops and classes to adults, teens, and children in the early 2000’s, and has given workshops to various groups and organizations throughout the province. He served on the Board of Directors for FUSION: The Ontario Clay and Glass Association in 2002 as Director at Large, where he put his formal graphic design and advertising skills to use, promoting FUSION, and its affiliated activities. After much deliberation, he resigned from FUSION Board of Director, to pursue his rapidly growing ceramics career. He hopes to continue once again with FUSION, when time allows.

Since 2002, he has maintained a studio and showroom, and supplied numerous galleries throughout Canada, and primarily in Ontario.  Some of the galleries that currently exhibit his work on an ongoing basis are: Art Gallery of Ontario, Canadian Clay and Glass Gallery, Gardiner Museum of Ceramic Art, Burlington Art Centre, and MacKenzie Art Gallery in Saskatchewan.

He and his work have been published in Clay Times Magazine, FUSION Magazine, Ceramics: Art & Perception, Canadian House & Home Magazine, London City Life Magazine, Treasures of Ontario, and Canada’s Style at Home Magazine.In October 2008, he was featured with his ceramics on HGTV’s ‘Pure Design’, which aired both in Canada, and the United States.

In 2004, Shane created an Art Award at his former high school, to be given annually to a graduating student, who is pursuing visual art-related studies at the post-secondary level.

Shane’s fascination with and passion for ceramics will continue to push him to experiment with the medium, as long as he is able.

2004 Containers of Beauty – The Gardiner Museum of Ceramic Art, Toronto, ON

2003 The Art of the Casserole – Jonathon Bancroft-Snell Gallery, London, ON

2001 A Matter of Clay – Jonathon Bancroft-Snell Gallery, London, ON

2002 Board of Directors for FUSION: The Ontario Clay and Glass Association

2000 2005 Teacher of Workshops to children, adults and teens at Ingersoll Creative Arts Centre

Deer with Landscape and Grid
12×12 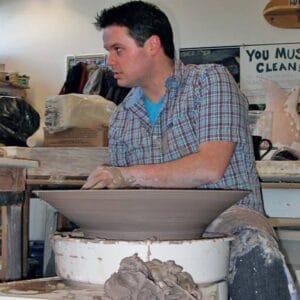 My work, focuses primarily on texture and organic imperfection.  I strive to create pieces that appear as though they have been unearthed or born in nature.   I try to mimic the appearance of surfaces that have been created over time.  Layers of peeling paint, mosses, lichens and erosion from daily exposure to the elements catch my creative eye.

I want my pieces not to be perfect,  but to have a sense of mystery.

Most of all,  I am fascinated with glazes and how they react in the kiln.  I multi-fire many of my pieces,  sometimes so many times that they ultimately crack under the stress.

Pottery not available for shipping. Please contact or visit the gallery to purchase. This is just a selection of styles of the numerous pieces we carry. 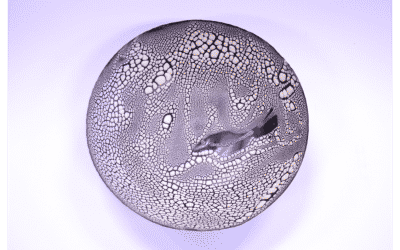 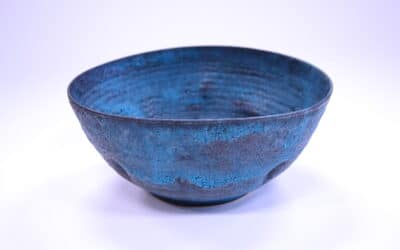 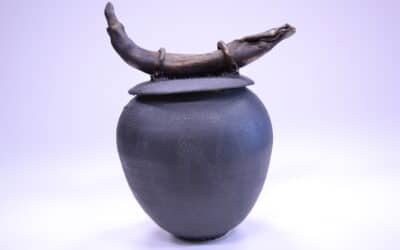 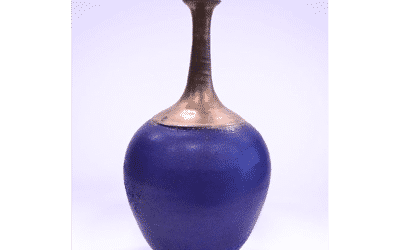 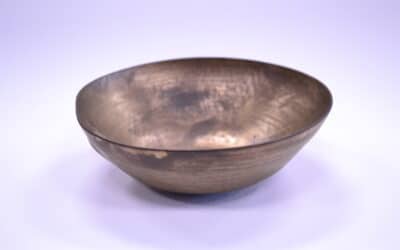