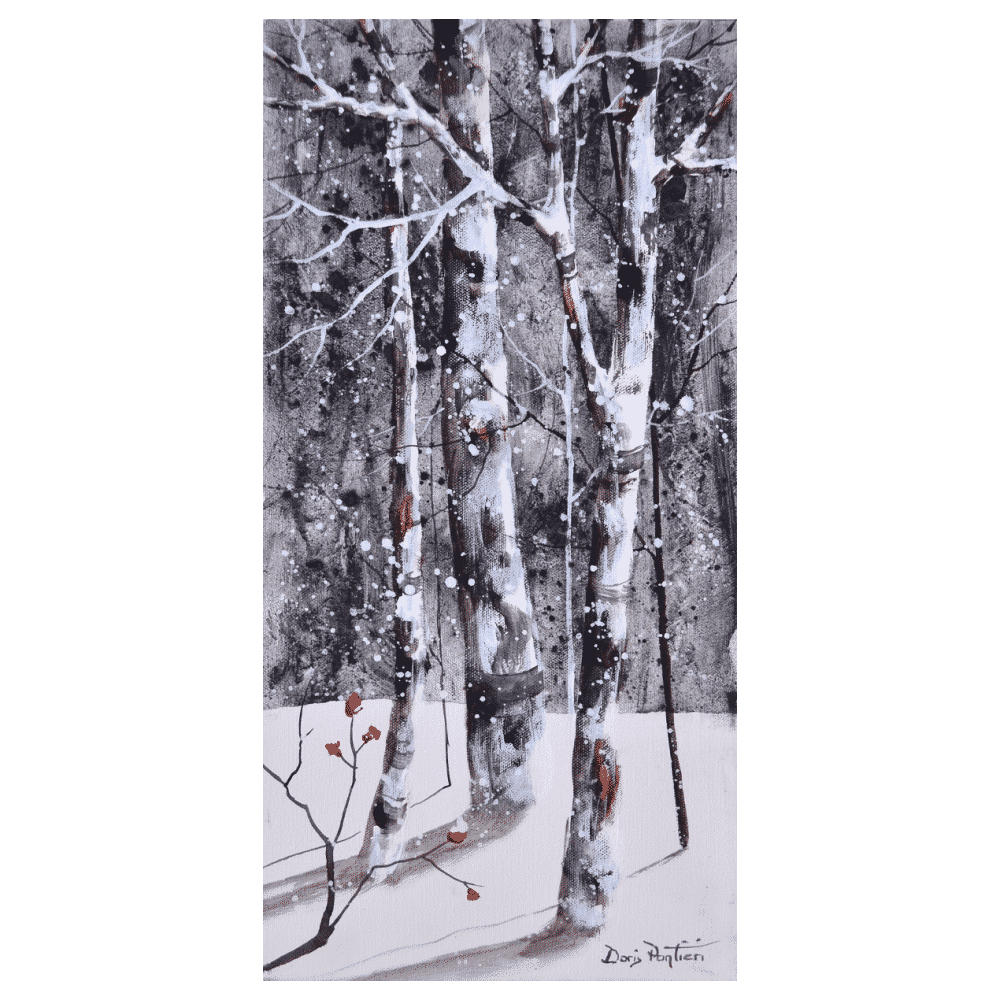 “Doris Pontieri has elevated the mediums of watercolour and acrylic to a form of expression that requires close attention and due analysis of her work. Educated in the mastery of oil painting, the artist has found artistic expression in the form of all mediums. Her work is well balanced and spontaneous, with an eye for effect. The result is an effusion of texture in which the figurative is drawn into the receding abstract background.…Her works are, ‘the purest, finest, sincerest things,’ that I have seen in a long time.” – Cosimo Stifani, Art Critic

Doris was raised in Toronto, where she completed her post-secondary education at Ryerson Polytechnical Institute majoring in psychology. She has been teaching the art of painting in all mediums for ten years, with her students enjoying her emotional approach to art. Doris’ works in oil, acrylic and watercolour have been shown and sold from Europe to Australia, and featured in international art shows including Art Expos in New York, Texas, Chicago and Philadelphia.

Her work has been featured on wine labels, magazine covers, in renowned local galleries, and she has produced a series of spontaneous, simultaneous compositions with musical composers for many live audiences. Paintings by Doris are in several private collections including the President of the Canadian United Nations and a board member of Sunnybrook Hospital. In the spring of 2013 one of her paintings will be sent to the Vatican in Italy.

Doris has been invited to participate in the Autumn Art Show at the McMichael Canadian Art Gallery for the past nine years. She has consistently ranked in the top five painters, featured as the top artist in 2005 and selected as the feature artist and Best in Show for the 2013 show. Prime and Global television produced a documentary on Doris and her art titled ‘Second Chance’ which aired in June of 2005. She was also featured on ‘Living in Toronto’ in March of 2008 working spontaneously with a musician. The summer of 2012 saw both Rogers TV and CBC interviewing Doris regarding her work.

Doris continues a freelance writing career, as the senior art writer and columnist for Tempo Toronto Magazine and feature arts writer for the Persian Tribune. She is also a regular contributor to the Barga News in Italy, a member of the Canadian Ethnic Media Association and now has a book entitled ‘Doris Pontieri…Art and Isms,’ which reveals her thoughts and her works.

Most recently Doris was one of the first Canadian artists to be selected to have her work exhibited at the December 2012 Société Nationale des Beaux-Arts (SBNA) annual show at the Louvre in Paris. Based on the quality and appeal of her work, Ms Pontieri easily secured her place in the delegation of just 12 artists representing Canada at this prestigious international art exhibition. She has been further honoured by the Paris Society of Arts, Science & Letters, who have chosen her to receive a medal for Outstanding Artwork, and is invited back to Paris to receive this award at a Gala in June of 2013. While in Paris her work was also exhibited at the Kameleon Gallery and the Jardin Gallery as well as being featured at the Brenart Gallery in Brussels for the month of October. Most recently she was personally selected by Marina Picasso, Pablo Picasso’s granddaughter to exhibit her works at the September 2013 Artists of the World show in Cannes, France.

The selection committee chose Ms Pontieri’s, Northern Birch Trees, on 22 x 30 inch canvas as a stunning example of great Canadian art. It is part of a series using a special mixed media technique developed exclusively by her, using charcoal, watercolour and acrylic paint. Her recent leap forward with this technique has enabled her to use canvas, which made it possible to paint much larger pieces which would appeal to international exhibits.“After many visits to northern Ontario during late winter, I wanted to recreate the feeling and strength of our beautiful Canadian birch trees, without painting them too heavily, ‘said Ms Pontieri. ‘Developing this mixed media technique allowed me to capture all that the trees have to say to us, and to Paris!” Artworld of Sherway is honoured to have been exhibiting the largest the largest collection of this series, including several showings of the piece featured at the Louvre.

Doris has again been selected for the SNBA exhibit at the Louvre, December 2013.